Busy writing to you from roughly 36000 feet above New Delhi, on a flight back to SA from Nepal. There are exactly 206 minutes left until we land in Dubai. Why the accuracy you ask? One reason:

There is a special place in hell reserved for the person that designed the seat I’m sitting in… My arse is so numb right now I’m scared to flatulate as I may inadvertently poo instead without realizing it.

Anyway, I thought I’d use this time to let you know how my Himalayan adventure went.

Myself and 2 mates decided to spend 15 days trekking through the greater Himalayan massif, namely the Annapurna Circuit. The circuit is pretty much a 15 day trek up through a range of mountains which involves ascending from 800m above sea level up to 5416m above sea level, culminating in us crossing the Thorung La pass. In the process, we passed through many small Nepalese villages of both Buddhist and Hindu faith.

As a result of the massive change in altitude, we experienced every sort of climate, from balmy, humid jungle with these massive waterfalls pouring out of sheer rock faces, to arid, dry and dusty plains where very little life can be sustained as a result of the thin air and cold temperatures. The last 2 days of the trek saw us navigating scree slopes (I.e. lose shale/rock as a result of landslides) and snow fields.

We chose to do the trip privately and managed to source an expert guide by the name of Bharat, who in my opinion, is probably one of the most amazing human beings I’ve ever had the privilege of meeting. But more of that later. Something a little unplanned occurred when the 3 of us were asked if we would mind 2 other Trekkers joining our group as it was the only way this couple could do the trek. We agreed, at first a little apprehensively, but it turned out to be an excellent decision too.

There is simply too much to write in an email about the past 3 weeks, so I’m going to chose the best bits and when I see you all again, we can catch up properly.

Before the trek started, we spent 3 days in Kathmandu. I’ve been to a few very third world countries but none of this could have prepared me for just how third world Kathmandu is! There are no tarred roads- every road is pretty much an offroad track. As for traffic- Joburg is a bloody dream in comparison! I mean, you are literally competing with cars, motorbikes, bicycles, humans, cows, dogs, bloody everything all doing their own thing without even the slightest comprehension of which side of the road they should actually be on in the first place! That said however, after a few days, it kind of felt like home and the place really started growing on us. Somehow in the madness, the city is quite simple and peaceful (I know it sounds like a contradiction, but it really is).

The 3 days flew by quickly! One of the highlights is beer is really cheap there, so every night was a good night and every morning was a little foggy 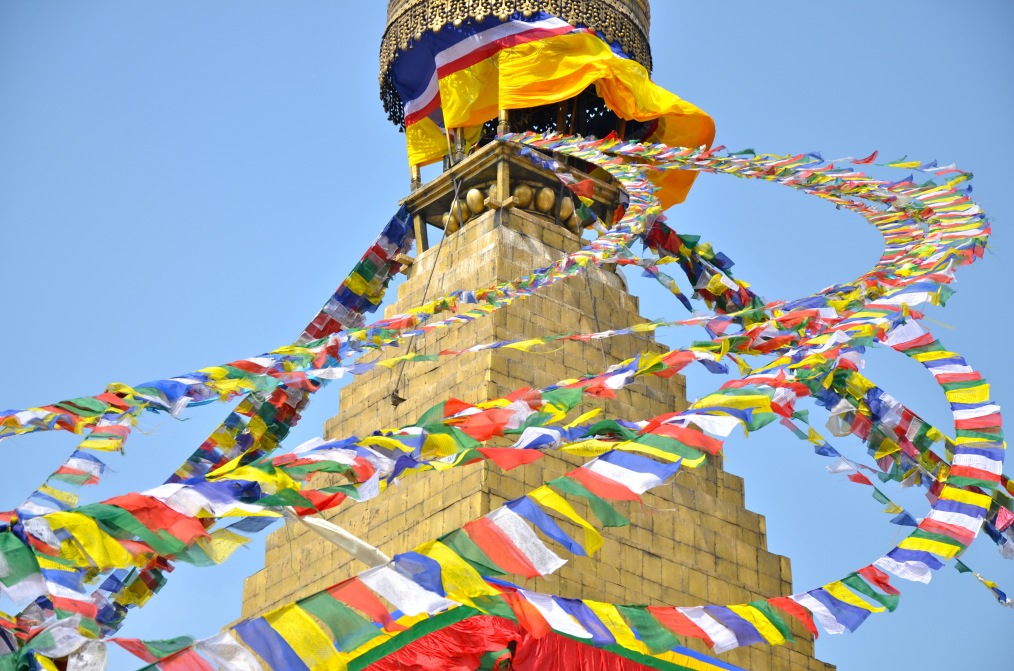 I’m feeling a little melancholy at the moment, now flying over Pakistan, but it needs to be said… This was the best thing I’ve done with my life. I honestly feel like the last few weeks have almost defined a part of me. I’ve been trying to rationalize it and all I really can do is summarise it as follows:

I’ve met the most amazing people – we slept in tea houses along the trek. A tea house is pretty much a Nepalese family run hotel which in essence is just their home that they’re opening up to strangers for such a small amount of money, it’s almost sad. Yet, despite the fact they’re living in poverty, with no basic utilities, unstable electricity, unsafe water and difficult living conditions, these tea house owners (one in particular in a little village called Chame), opened her house and her heart to us and made us feel at home.

I guess this really affected me as we are all inclined to take the little things for granted… Hell, I know I do! Yet here, in the middle of nowhere, in the highest, most gob-smackingly beautiful mountain range in the world, you have people that don’t even have the little things to take for granted, yet will happily utilize whatever little they have to help you. I think that human nature in these parts of the world, where it hasn’t been corrupted by the tentacles of capitalism, is just beautiful.

The mountains… Wow wow wow! I must tell you, according to our Nepalese guide and porters, any ‘mountain’ that doesn’t have snow permanently on it isn’t a mountain, it’s a hill. So, according to them, SA doesn’t have any mountains! I guess it’s easy for them to say when you have peaks soaring over your heads with a height in excess on 7000 meters that have permanent glaciers!

The Annapurna Circuit is famous for these mountains and we spent a great deal of the past few weeks discovering Annapurna II, III,IV, Ganggapurna, Manaslu, Dualaghiri, Chulu West and Central- all some of the highest peaks in the world. The highlight of the trek was crossing the Thorung La pass roughly 12days into the trek. It’s special as its the highest point of our trek, at 5416 meters. And it’s quite an accomplishment to reach it as it means you have navigated harsh terrain to get there, including walking on cliff edges covered in ice and snow (mom, this is probably a good time to get a brown paper bag if you’re starting to hyperventilate). The altitude also becomes a problem as the air is so thin, it becomes seriously easy to over exert yourself on the ascent and regaining your breath takes some effort. It almost feels like you’re exercising whilst breathing through a straw. The result of this is a very slow pace to try and cope with it all. Ascending too quickly can also lead to altitude sickness which can claim lives. Thankfully, we were all fine and nobody had any symptoms. Obviously, being as neurotic as I am, I did go to the doctor before the trip and got every possible medication for altitude sickness prescribed to me just in case

The views from the top of the Thorung La were just the best. We were above cloud level and were looking at these massive, spectacular peaks soaring over the clouds, glistening in snow. There are peaks literally all around you, and fresh snow on the ground and prayer flags hung by trekkers who successfully reach the pass. I wish I could bottle that experience and relive it over and over again. 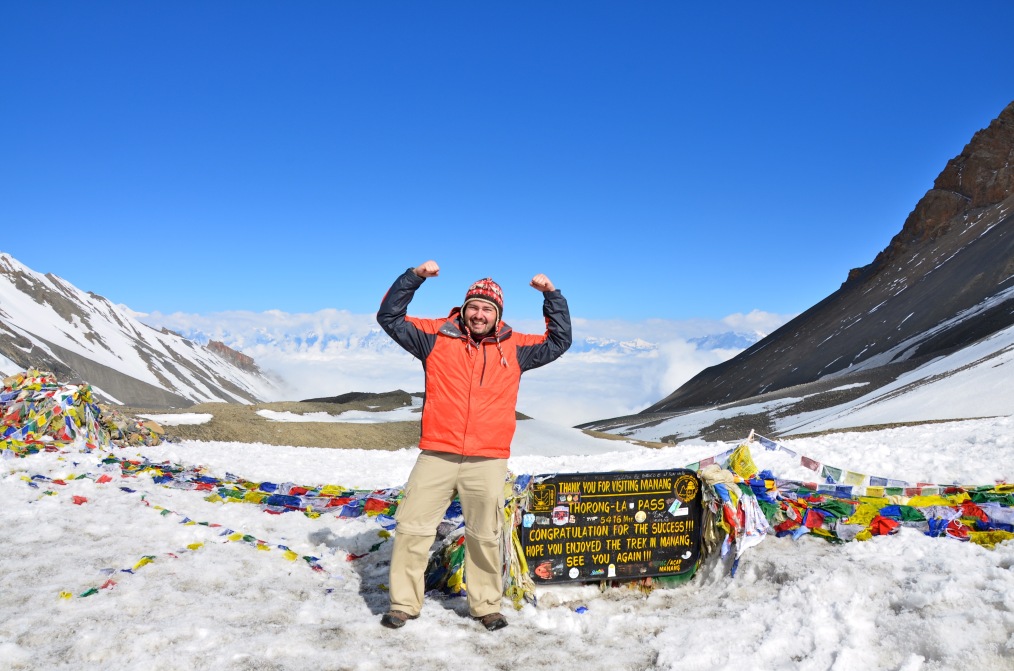 Our guide and porters:

Firstly, the porters- I’ve never met such strong okes in my life. They were responsible for carrying our big bags throughout the pass. At first, we wondered if we needed them but our trekking agency is obliged to utilize porters as part of a tourism job creation programme. Thank god we did as the trek was hard enough without having to carry your own bag! Yet these guys marched ahead of us, always first to smile. In the mornings, they’d help with breakfast and water runs. What a stellar bunch of humans. All from simple backgrounds, all young with families which this job keeps them away from, yet you couldn’t find a nicer lot of chaps.

Our guide, Bharat- wow. A man of 29 years old, but much wiser than his years. Insanely knowledgeable about the mountains and cultures of Nepal.
One of the most helpful, kind and generous people to exist too. After our trek finished in a town about a 30 min flight away from Kathmandu, he caught a bus back home. When we flew back to Kathmandu a few days later, there he was at the airport to meet us, not as a guide and not as part of his job, but as our friend. Then, tonight, whilst planning to make our way to the airport, the first monsoon rains started to fall which meant Kathmandu pretty much shuts down as the roads are just terrible. We couldn’t even find a taxi to get to the airport. No problem for Bharat- there he was, running down the streets of Kathmandu, hunting down a taxi in a torrential downpour until he found us one that was prepared to brave the rain and transport us. What a brilliant human being. I will definitely be back in Nepal one day and he will be the first person I look up.

Before we knew what was what, the trek has finished and we were on possibly the most dodgy bus on the face of the earth to our end point, a town called Pokhara. The busses are seriously old and the drivers don’t adhere to the maximum capacity of 16 passengers… I think we may have had close to 40 at one point. I even had a random woman’s baby on my lap! To make it worse, bus drivers don’t understand the concept of speed (everything must be fast) and there are poor dirt/mud roads in the villages, which all run on a cliff edge. I won’t pretend to be all brave here, it was bloody nerve racking at points. All you really could do was try not to think of it and hope for the safe passage of the next 7 hour ride!

It’s weird really… When we first got to Nepal, we saw some westerners who must have been like me at some point- coming to the country and falling in love with the Himalayas and the people and then deciding to leave the western world behind, throw their jobs in and live here like locals. I still remember wondering what could possibly make them want to do that. Funny thing is that 3 weeks later, I can totally, absolutely clearly understand why… Life is simple and basic here, people are good hearted and kind, and free of the shackles of materialism. What you see is what you get. And what you get is a country with the most astonishing natural beauty I’ve ever seen and a society that is driven by community and a desire to be a good person. God, I love it.

Don’t get me wrong, I’m not going to quit my job and start walking around barefooted covered in hemp, but I can definitely see why people would do that.

And that’s it- on my way home after an epic adventure. Currently 96 minutes left on this leg of the return trip, about to cross the Arabian Gulf. Counting the minutes until I can get off this seat!