I’m currently writing to you from an English pub called the Britannia, in a city called Yekaterinburg. I guess you could say ‘why am I not in a Russian pub?’, but honestly, I just want to read a menu in English for a change. In the last 2 weeks, I think I’ve inadvertently eaten testicles, plastic (don’t ask) and consumed some pretty nasty tea.

I’ve officially started the Trans Siberian Railway, and will be crossing through Siberia, and Mongolia with an ultimate destination of Beijing in a months time. Technically, the route is called the Trans Mongolian – a 7621 km journey through Russia, Mongolia and China.

My first stop from Moscow was a small town called Vladimir, 190kms from Moscow. Small and quaint and just what the doctor ordered after the madness that is Saint Petersburg and Moscow. The heart of the town is located on a bluff, the higher vantage point affords one with some phenomenal views of the surrounding countryside. The sky seems to go on forever here which makes the pinkish/purpley sunsets something to behold. 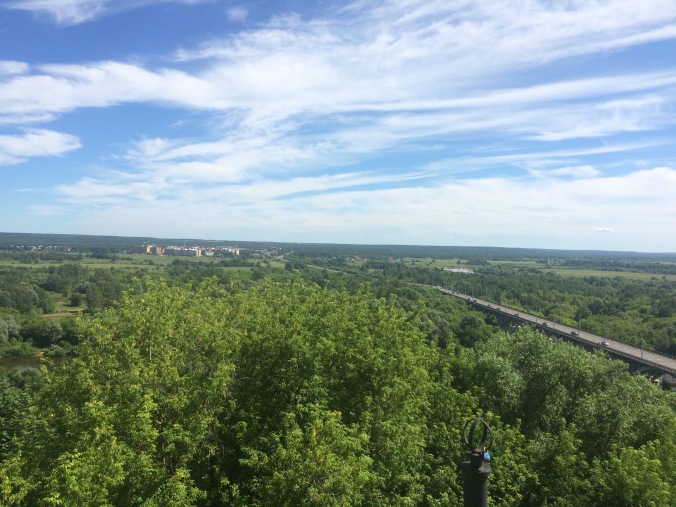 View from top of the bluff in Vladimir – horizon goes on forever!

There are the usual plethora of churches, cathedrals and monasteries to see here all equally beautiful, but the one that really hit me for 6 was a church outside Vladimir, in a town called Bogolyubovo, maybe 16 kms away. The Church of the Intercession on the Nerl is located on farmland in the middle of nowhere. You have to walk about 3 Kms through a field full of flowers and grass to get to it. In the distance, you see this image of the church appearing – it’s quite something to see. I’m surprised some Hollywood producer hasn’t used this as a movie set. Actually I’m not surprised- America and Russia aren’t friends… 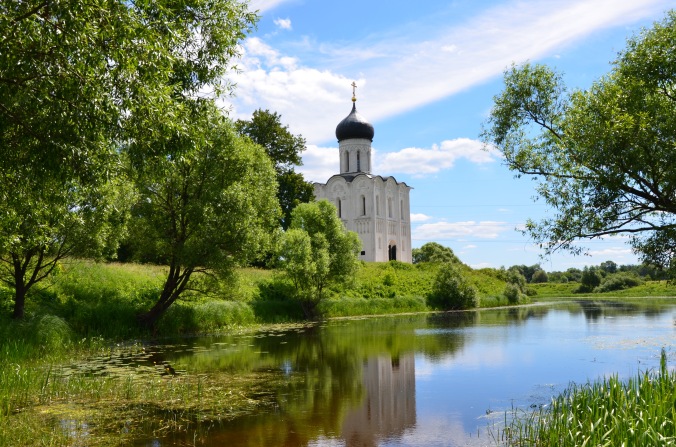 Church of the Intercession on the Nerl – Bogolyubovo 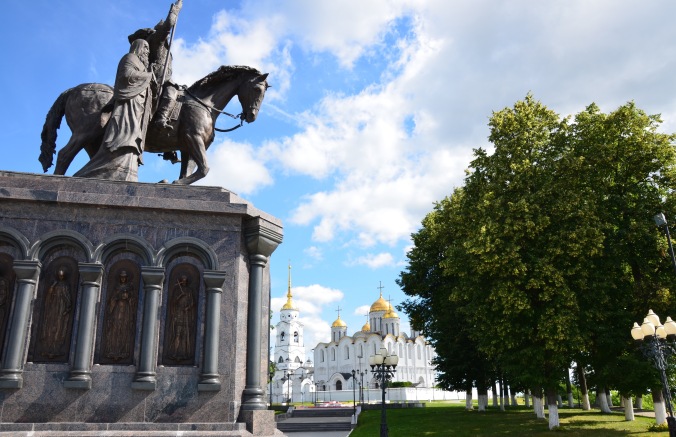 The next stop post Vladimir is Yekaterinburg. This meant embarking on the first long train trip. 1610 kms, 24 hours and traversing through 2 times zones! The train has been something I’ve been really excited about- goes back to being a kid and loving trains I think. 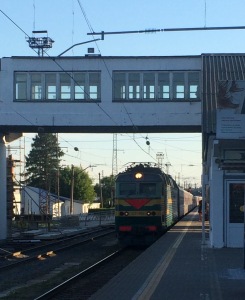 My train to Yekaterinburg arriving in Vladimir

The train in itself is not new- you can see it was built a while ago but well looked after. The cabins, 2 bunk beds in each, are neat and tidy, clean bed linen is provided (no need to bring a sleeping bag, unless you’re doing this in winter). The trains are huge and chug along powerfully through the night. It’s hard not to be mesmerized staring out of the window, watching the sunset through the silhouettes of the raw Russian conifer forests as you pass by.

The bathroom however, can best be described as a character building experience. I’m heavily dosing myself up on Immodium to prevent ever having to go.

I’m blown away by how beautiful rural Russia is. By rural, I mean the vast expanse of land between cities and towns. The forests here aren’t plantations- there is nothing man-made about them. And they are just awesome. Christmas was made in rural Russia. All these different, randomly growing, dense forests of conifers just make me think of Christmas. I would love to do this trip in winter just to see the snow in these forests! If I remember correctly, Siberia only starts around the 2100km mark, so I can’t wait to see that scenery if this is anything to go by!

It’s certainly worth the stop as 24 hours on any train will drive you dilly. The town, the third biggest in Russia, although it doesn’t feel remotely like its big brothers, is trying hard to be a tourist-friendly town. The small metro system has English translations (big up on Moscow) and the main tourist sites can be seen by simply following a painted red line around the city (this is a nice touch).

In terms of sites, all Yekaterinburg really has going for it is it’s the town where the last Tzar (Nicolas II) and his family were assassinated. The Cathedral on Blood marks this event. Boris Yeltsin was also born here (I can hear the oohs and aaaahs of astonishment from here guys).

It’s a small, unremarkable city but a great stop on your journey. Call it a shower stop if you will.

The next leg of the trip, the longest yet, will take me from Yekaterinburg to Krasnoyarsk. I’m living in a comfortable blanket of doubt as to how long this leg will be but I think it’s around 30 hours!

I’ll put together a complete Trans Siberian budget once it comes to an end- I think it’ll be more useful that way.