I spent a few days in Xi’an, the capital of the Shaanxi Province of China – a place best known for the Terracotta Army. There’s a lot more to the city, though and worth a stop. Here are some photos of my stay there.

This is the main pit of unearthed Terracotta soldiers. It’s quite a cool story: The first Emperor of China, a chap by the name of Qin Shi Huang commissioned these soldiers be created and arranged in an army formation around his mausoleum in order to protect him in the afterlife. What’s really impressive is of all the soldiers dug up, every single one has a different face!

To get to the Terracotta Army means an hour bus ride from the city. Not a bad trip out but leave EARLY. If you think you’re leaving early, you’re not – shave another hour off. This place attracts some insane crowds. With the fear of God instilled after hearing horror stories, I left before the sun rose and virtually had the one pit to myself (In Chinese – this means there was only an additional 100 people there 🙂 )

In Xi’an itself, there is an area called the Muslim Quarter. In essence, it’s a gigantic night market that sells some incredible Chinese food. This man is busy finely chopping nuts to make a local nut-based dessert. I tried it, it tastes like crap, but definitely interesting to watch the process!

One of the many street butchers in the Muslim Quarter. This chap is busy chopping meat up to make skewers, on the right, to grill and sell to passers by. Really great street food! 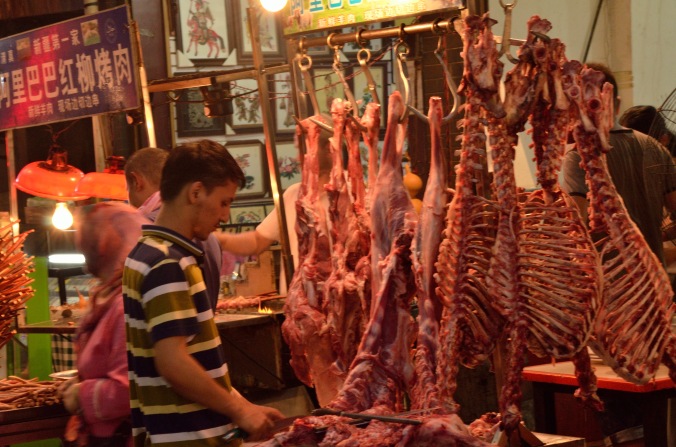 Interestingly, pork is the most common meat found in the Muslim Quarter. This butcher is a master-carver! He literally left nothing on the carcass. He was very proud of his skill and I think he was showing off for me so I could get a good photo!

Meat skewers about to be grilled. The meat consumption here every night must be incredible.

The Muslim Quarter in full swing at night. Epic crowds but it adds to the spirit of the place. Or so I keep telling myself. 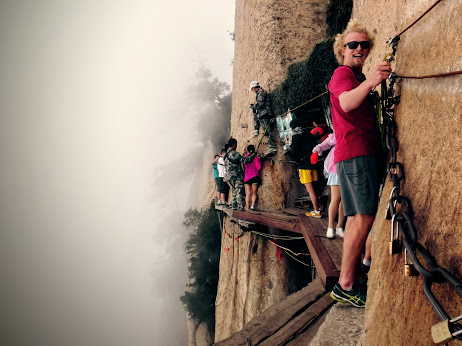 I didn’t do this but a friend of mine did. Thanks for the photo Dennis! It’s Mount Huashan. My crap balance would have seen me killing myself doing this.

If you’re interested in visiting Xi’an, I can recommend my hostel – Han Tang Hostel – cheap, clean rooms, in a great location and great staff.

My budget came in at $39 a day in Xi’an, which includes a visit to the Terracotta Army. The sites in China are absolutely ridiculously expense. Personally, I think unjustifiably expensive!

The bus and subway system here is first class – you’ll have no issues getting around.

One thought on “Xi’an in pictures”

Not a great outdoors day today 🌊
Making the most of the great weather here and walked from Berowra to Mt Kuring -Gai. Spectacular day hike! I even threw in a selfie for old times sake.
I am very ready for social distancing to end. Who’d have thought I’d miss paying $12 a pint 🤔
Practicing safe social distancing in this stunning city. Hopefully Sydney and the rest of the world will soon come alive again. Such a surreal experience seeing this city in a perpetual sleep. #covid19 #coronavirus #socialdistancing #sydney
The benefits of a city living in self-isolation! #Sydney
Missed my Qantas flight thanks to load shedding in South Africa so caught another plane via Perth and was rewarded with this cool view of #RottnestIsland
My sister got married today! #nomoregarterforcarter #midlands
Can’t believe my sister is getting married so soon! #nomoregarterforcarter #midlands #southafrica
This little dude is the bees knees!
%d bloggers like this: