If you know me, you will be aware of the fact that I take great pride in my rigorous gym routine. On any given Saturday prior to commencing this adventure, I would walk from my car to the Woolworths 10 metres away and stock up on a weekend supply of Romany Creams and Coke (Zero of course – got to watch those love handles). I’d then proceed to move to my couch and spend the next 24 hours watching ‘My 600 lb Life’ and feel good about myself. Monique – I still hold you accountable for this TV show by the way…

Laos is an outdoor Mecca: there are so many activities that will keep you busy for days here. Most recently, I’ve been in Luang Prabang with my friend and we decided to go trekking in the nearby mountains. Two nights after my return from the trek, I still feel like I have been hit by a truck!

When it comes to choosing a multi-day trek, I’m pretty discerning in an attempt to prevent various ailments such as heart attacks and extreme fatigue. Choosing this trek, I was lucky as the only option for a two day/one night excursion were marked as ‘easy to moderate’ and thus, I could save face with Bianca without having to insist we don’t go rock climbing or some shit.

Easy to moderate my arse.

Day one started with a jungle trek which, although was really beautiful, was technical as we had to hop over innumerable boulders and jagged, sharp volcanic rock. I felt like a Chimpanzee and probably looked like one too! My balance isn’t so hot after the Frank issue either and there were a number of crudely constructed narrow bamboo bridges we needed to navigate over as well. Long story short, I only saw my arse once and it was quite a dignified fall if I do say so myself.

On a serious vein though, this day was beautiful. The scenery we passed through was out of this world – you’d be forgiven for thinking you were on set for a new Jurassic Park movie – jagged cliffs surrounding you, occasional caves and massive rivers – truly spectacular.

We spent that night in a homestay in a tiny town called Ban Hadkokh. It was a typical homestay – a local family opened their home up to us. The home itself was a small self-sustained farm for all intents and purposes: we had  variety of farm animals running around, a small vegetable garden and the river at the base of the property served as the local fishing spot. We even spotted a snake edging its way into a chicken’s nest. A local captured it and aimed it Bianca’s way. They thought it was pretty funny, and poor Bianca ran another kilometre that night 🙂 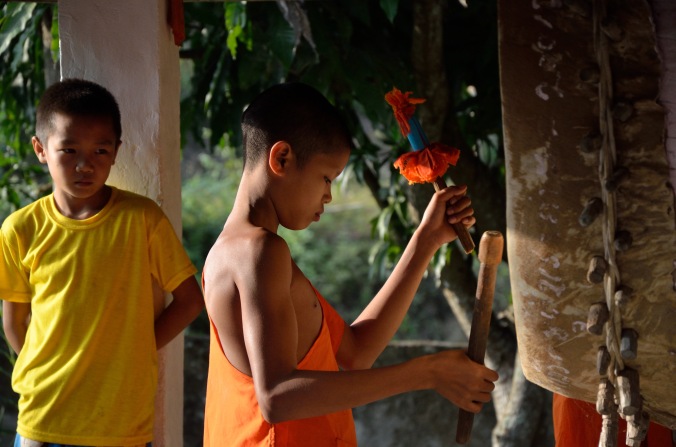 To add to the home stay experience, there was a squat toilet (I love these things). The water to flush the toilet was housed in a concrete trough near the toilet. You literally have to take a bucket of water from the trough and pour it into the squat toilet once you’re finished. Laos has reached the highest echelons of sanitation. It turns out that the trough of water doubles up as the water with which you have to shower with. A day of trekking in the tropics and smelling like a sewer rat wasn’t enough motivation for me to shower that night. I’m pretty sure Malaria and Dengue mosquitoes were scared to approach me that night!

My bed does need a special mention (and I write this tongue in cheek as I know it’s the best the homestay has to offer and I wouldn’t have had it any other way, kind of). This thing was about 3 cm thick and hard as nails. I literally felt like the weight of my body was going to pop my kidneys as there was no give in the mattress. Sleeping on my side wouldn’t have helped as my pelvis would’ve cracked. So what does a man do? Simple – I popped 2 Allergix and hoped to everything that was holy they would knock me the hell out.

Lunch on the trek – was really good!

Bring on day 2: a day of kayaking from the homestay for about 5 hours. I did some kayaking in Vang Vieng and only ran Bianca and I ashore once or twice (currents were extremely strong, obviously). This was actually really pleasant. I wore a vest (wife beater for the South Africans reading this) because at this point, I stopped caring about anything related to appearance and in this heat, it was either a vest or kayaking naked. That said, the glare that would come off my white body would necessitate cataract surgery for the greater Mekong population.

Although I still have an uncontrollable twitch in my left shoulder and can’t feel my finger tips anymore, it was really great fun! We explored the local Pak Ou cave (which has an interesting back story relating to Animism) and kayaked down the Mekong for some distance (my rough calculations equate to a total distance covered of 33 million kilometers). You’ll be pleased to know that in 5 hours of paddling, we only had a single directional incident, which although Bianca doesn’t believe me, was brought on by the ridiculously strong current. There must have been a full moon that night or something.

I’m currently typing this from a cafe in Luang Prabang, possibly one of the most quaint towns I’ve been in for quite some time. There’s a heavy French influence and it’s a super spot to spend a few days recovering from what could quite possibly be the most exercise I’ve done in the past 2 years!