Catching a boat between these 2 islands is a super way of exploring the Lesser Sunda’s which are sometimes overlooked as a result of their difficult location. Would I do it again? Yes. Would I do it differently? Yes. Here’s why.

I was based in Senggigi, in Lombok – your typical tourist stretch of a beach town, full of Australian run bars and restaurants alongside a million tour operators. The Aussie influence is strong here with many expats thinking the way to the Promised Land is to move to Indonesia and open a bar.

Despite researching recommended boat companies, I grew lazy after being unable to find them in Senggigi and just signed up with one that was close to my hostel. This is the first thing I would have changed – I should have missioned through to Kuta on Lombok and looked a little harder. As a side note, I believe there are many tour operators operating from the Gili’s, but having been there in a previous trip, I wasn’t going to head there this time.

Our trip started with an 11am pick up and 2 hour drive to the east coast of Lombok, where we boarded our vessel and got sailing around 3pm. We were fortunate as there were only 8 travellers on our boat. Typically, the boat accommodates 25 but I can’t see how – I’d say 15 would be an absolute maximum.

The boat itself looks top heavy and it’s clear it’s been around the block. That said, it was reliable and served us well for 4 days at sea. It needs to be said that most boats plying this route are as basic AF. Creature comforts don’t exist.

The trip itself was decent. In essence, it’s a 4 day 3 night form of transport between Lombok and Flores and is one hell of a lot more exciting than merely flying the route. Here’s a brief breakdown of the 4 days:

Day 1: Mainly a transit day – board the boat, make friends and sail from the port of Labuan Kayangan past a series of gob-smackingly beautiful islands where we set anchor and swam in the ocean. From a sight point of view, you’re hugging the coast line with some incredible views with Mount Rinjani towering in the distance. Postcard stuff. 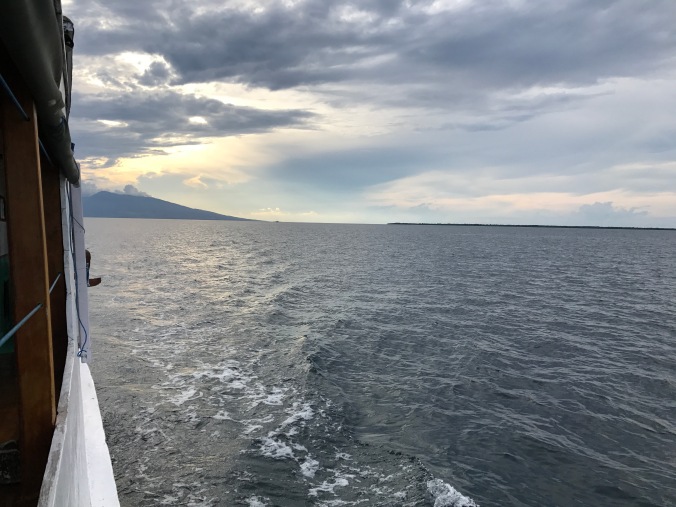 Day 2: The first and only stop is to Moyo Beach where we hiked for a short while to the Moyo Waterfall – a beautiful waterfall on what otherwise seems like a deserted, small island. Day 2 is largely a transport day, which saw us sailing for almost 24 hours straight after visiting the waterfall as we needed to start making proper headway to our destination.

We encountered a storm at sea that afternoon which continued throughout the night, only ending in the wee hours of the morning. Honestly one of the most terrifying experiences of my life, being stuck on a boat that felt top-heavy, ratting through the ocean, with thunder and lightening all about. I suspect even the crew were nervous as none of them slept that night to make sure we weren’t taking on too much water. I still recall thinking about survival measures should shit really hit the fan, but the honest truth is that if it did, I’d need a miracle. Fortunately, after one of the worst nights of my 31 years, the storm cleared and we were greeted with a spectacular sunrise the following morning.

Day 3: The highlight day. It started with our first point – Gili Laba. This is really a point in the ocean where 2 islands sort of join, but it makes for some super hiking and viewpoints. After hiking for about an hour, one is greeted with phenomenal views of the Lesser Sundas. A word of warning though – the crew will say you can do the hike with flip flops – no you can’t.

From Gili Laba, we made our way to Manta Point, an area where Manta Rays have been spotted and we began scouring the waters to spot them. This was an awesome experience as we were all standing on the edge of the boat and as soon as we saw one, we’d jump into the water and swim like crazy to catch up with it, but they’re so fast, you typically only see a blur. On my third such attempt at viewing these graceful creatures, I got lucky and had one swim right past me!

The day ended with a visit to the Pink Beach (the sand is literally light pink) where we snorkelled. I’ve been spoilt with snorkelling, having snorkelled all over South East Asia and this was the cherry on the cake – easily the best snorkelling I’ve done and it was so unexpected, which made it that much better!

The day ended in a very chilled fashion – anchored off a nearby island, trying hard to finish our stash of Bintang as it was our last night at sea. Tough times!

Day 4: A visit to Rinca Island to see the Komodo Dragons. One has a choice to either see these beasts on Komodo Island or Rinca, but it seemed at the time that Rinca offered a more authentic experience so we opted to head there rather.

We hiked around the island for 2 or 3 hours spotting these massive dragons and they give me the creeps to be honest – massive, poisonous, vicious killing machines. Eish. 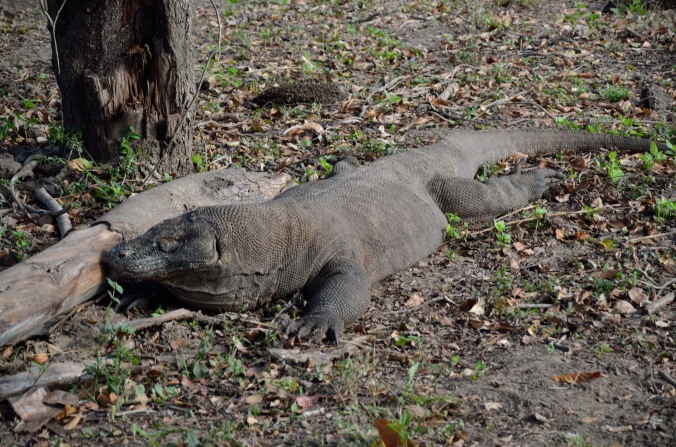 There was a zoom-lens firmly attached to my camera to get this shot. There was a nautical mile between me and this guy.

And that was that – our boat docked in Labuan Bajo, the capital of Flores, where we parted ways. I checked into my hostel (which I’d recommend – Bajo Nature Backpackers – cheap, very clean and comfortable) and spent the next 5 hours in the shower trying to get clean again!

As for Labuan Bajo – another typical Indonesian harbour tourist town. Everything runs off the main street which is easy enough to walk. It’s touristy as all hell but the perfect place to chill and do very little for a day or 2 to recover from the boat trip.

As yes, there’s an airport if you need to go back west without having to do the boat trip again!

Whilst the sites seen were remarkable, and the experiences (even the storm) were great/character-building, I can’t help but feel that this is becoming a little bit of a tourist trap and as a result, the level of quality is sliding. I’d 100% recommend you do this boat trip, but I’d really, really encourage you to do proper homework when choosing your tour operator – this will make all the difference!