After leaving Bangkok, we made our way south to spend the next 2 weeks island hopping. I think it’s safe to say we are all 5 shades darker now and are responsible for the Nivea share price rocketing after all the sun block we consumed. Oh, we also learnt a valuable lesson:  don’t play with the local rum- it always wins.

Our first stop was Koh Phangan- an island in the Gulf of Thailand. Getting there meant a long bus ride in a bus that was lit up like a Christmas tree, followed by a ferry through a rainstorm. Upon arrival on the island, I was reminded just how stubborn the 5 of us really are. Here’s why:

The local taxi will charge you 100 baht to get from the pier to your hostel. But the catch is that it’s 100 baht each. It’s funny how we accept this back home but for some reason, we were adamant we wouldn’t pay a cent over 20 baht each (100 baht in total as that seemed reasonable).  Not one driver agreed (and in retrospect, I get it) so our collective stubbornness won and we decided we would rather walk to the hostel. Let me tell you 3.5kms with a backpack is long! And on a tropical  island, you could have built a desalination plant on my back and solved South Africa’s water crisis. But all is well that ends well – we arrived, settled in and found a spot to have a beer.

Froners taking in the view from Krabi.

The following day saw us mostly doing our own thing. Wilco and I went on a hunt for this mystical ‘secret’ beach which is so effing secret, we couldn’t find it. We did, however, venture to the far side of the island and discovered one of the best beaches on the island called Thong Nai Pan. What made the beach better was the fact that this awesome resort didn’t mind that we weren’t guests and let us use their loungers and bar. It’s amazing how a Mojito can improve the view!

Told you the view is better with a Mojito!

Upon regrouping that evening, Bark and Kaas, who had ventured to numerous beaches that day, including the stellar beach discovered by Wilco and I, informed us that we were delusional and that our beach paled in comparison to a beach they discovered called Ko Mae. Judging by the way they were carrying on, we naturally assumed that they had discovered the Promised Land and we solidified our plans to visit this paradise the following day.

Clearly Bark and Kaas were wearing their rose-tinted sunglasses the previous day. What was meant to make Bora Bora look like a dam, was in fact, the dam. Even the beer I tried to console myself with was sad. Consuming it felt like I was mourning the loss of a loved one as I knew the real paradise was the beach we had discovered the previous day. The disappointment was real.

NOT the beach we were promised – this is Sunrise Beach on Koh Lipe.

The plan was to dance until the sun came up but we were a little optimistic. Wilco, Kaas and I made it to 5am but called it a night then as we had a ferry to catch at 8am. Not too sure why we tortured ourselves with this schedule. I doubt I’ll ever forget the image of Henry (who thinks he may have walked the 6 kms home that evening but can’t remember) sitting on this ferry, covered in lumo body paint, clutching his inflatable plane pillow as if it were a pacifier, wishing he would just die to get over the pain!

We eventually arrived in Krabi, our next stop. The hostel we stayed in goes to great lengths to inform all its guests it’s a party hostel but it was quite possibly the quietest hostel I’ve ever stayed in. The downside is that the beds are, in Kaas’s words, ‘dog kennels’, and I completely agree. In essence, you have a hole in the wall and a curtain at the foot end of the bed. Strangely, sleeping in this boxed-in fashion left me feeling extraordinarily vulnerable?

After checking in, we located possibly the best Indian restaurant on earth and consumed ridiculous amounts of curry in an attempt to eat away the hangover. I’m a comfort eater, what can I say?

Krabi is a great place from which to venture out and explore 2 famous beaches: Railay Beach and Maya Bay (from the movie ‘The Beach’). We opted to skip the crowds at Phi Phi and Phuket.

When we arrived at Railay Beach, we learnt that there was an observation deck and a cave that we could hike to. Sadly, however, Barkie missed the word ‘hike’ when we discussed this, so needless to say, the rest of us were subjected to verbal abuse for a considerable period. The highlight for me was overhearing Bark and Kaas bitching about one particularly difficult part of the hike that involved ropes and a rather steep descent. Kaas, a man who takes a fair deal of precaution with life, asks Barkie in the most serious tone how good his travel insurance was, fearing the worst. For some reason this sentence cracked me up and I laughed for the rest of the day.

A terrible sunset from Krabi.

When we eventually found the cave, we ventured into it and I’ll be honest, there were parts of the walk through that were terrifying. There was a rickety old ladder we had to climb. If that thing broke, we’d still be in the cave today! Kaas isn’t a fan of bats, rats and the like and here he was, in the home of such creatures. He held it together but the man was on high alert! Another phrase which gets me laughing as I write this is poor Kaasie saying: “Ok fine then, let me crawl into this cave and face all my fears at the same time then!”.
We spent Christmas on Maya Bay – you couldn’t ask for a better setting! Wilco made sure the rest of us felt obese by parading around the beach looking like an underwear model, whilst the rest of us looked like an exhibition at Sea World.

From Krabi, we made our way to Koh Lipe – a tiny island in the Andaman sea, 70kms off the coast of Thailand, right next to Malaysia. I’m sure the beaches on this island could give the best beaches in the world a run for their money: pristine, white sand; crystal clear blue water of all different shades – it is incredible.

The best part of the 6 days we spent there was that we had no plans – everyday went along the same line: get up, have breakfast and make our way to one of the superb beaches for a swim and chill.
There was one crisis, however, but Wilco and I saved the day. And saved Henry’s life. Henry decided to rent a kayak and go exploring a few of the bays. Despite being warned of the strong wind, he decided he was invincible and ventured out to sea.

Fast forward 2 hours and a few panicked messages and phone calls later, Wilco and I gallantly rushed off to find help that would rescue him and his capsized kayak from the boulders. Henry is alive, but that’s entirely a result of the quick thinking and superior intellect of Wilco and I. As a result, Henry has promised to never let us pay for another beer again (a promise that was broken after beer number 1). Life is cheap these days! 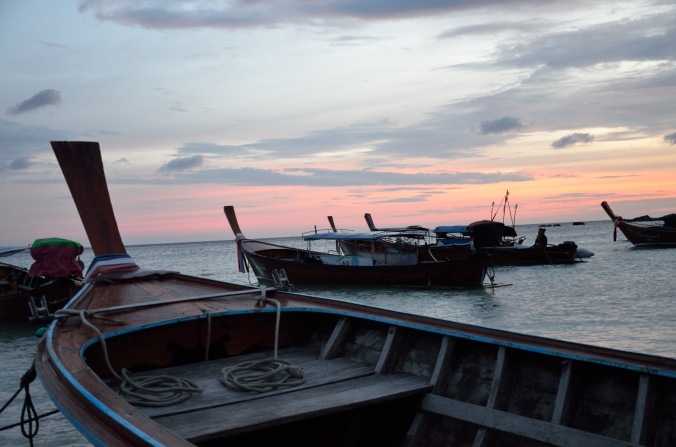 New Years was also a great night. I’d come down with flu so wasn’t feeling on top of the world, which wasn’t aided by FOMO and resulted in me jumping into a swimming pool at midnight to join the guys. I’m paying for this now with a partially lost voice and worse flu :-(. I think fun was had by the rest of the clan if the stories are anything to go by.
And that’s it sadly. I’m writing this from Yangon, Myanmar, having arrived last night; Bark is back on South African soil with the other 3 lads currently 36,000 feet in the air. All good things do come to an end!