Myanmar- sho. I’ve heard the stories about it being one of the last refuges in South East Asia if you’re looking for ‘raw’ Asia. The stories were right- I think this is the most authentic South East Asian country I’ve been to so far.

Myanmar (Burma) only properly opened up to tourism fairly recently thanks to its rather tumultuous history. As a result, its approach to tourism isn’t as overpowering as its neighbors. I like that- it gives off a more authentic feeling and the local people are truly friendly and kind- I think this gets lost in mass tourism sadly. It’s also sad to think that it is inevitable that this will wear off in time as more and more people discover this incredible country. 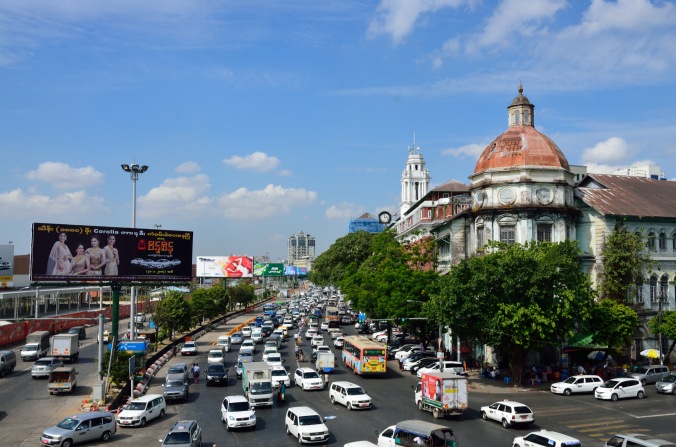 No Asian city would be complete without the crazy traffic!

I flew in from Bangkok expecting to land on a mud strip in the bush. Boy, was I wrong. Yangon International Airport is one of the nicest airports I’ve been to. The immigration officials- the friendliest I’ve encountered. Typically, everyone shits themselves when going through immigration as the airports tend to hire individuals who don’t score very highly on the EQ index. Not in Yangon. I forgot to print out my e-visa so when I got to the front of the queue, there was a snag. To my surprise, instead of being told to make a plan, the official gets out of his chair, summons someone to come to me and then this chap ran off to print my visa for me. How cool is that? It really enhanced my good feeling to the country.

Young Monks at the Shwegadon Pagoda.

I spent 3 nights in the capital, Yangon (previously Rangoon). I generally try and spend as little time in capital cities as possible as they’re big and dusty, and typically, aren’t that interesting. I’d come down with a cold so decided to extend my stay there by a day and take it easy. I’m really glad I did. Although Yangon certainly is big and dusty, there is a cool vibe to the place. For one, there aren’t many tourists and secondly, the city is extremely religious and traditional- something that can get lost in the madness of a big city.

The highlight of my time there was visiting the Shwegadon Pagoda. It’s one of the most important Buddhist Pagodas in the world and that fact becomes very obvious when you see it. It’s massive, covered in gold and jewels, and the pilgrims visiting the site are as devout as they come. The Pagoda is massive and it’s very easy to get caught up in the good vibes when you’re there. I spent the better part of 2 hours just people watching- it was fantastic!

The mighty Shwegadon Pagoda in Yangon – how awesome are those clouds?

A monk doing a circuit around the Shwegadon Pagoda.

I visited a number of other Pagodas in the city, namely the Sule and Botahtaung Pagodas. Both special in their own rights. Sule is located in a traffic circle, which makes getting to it a test of faith in Asian traffic!

This country also made me realize just how badly Vodacom, MTN and Cell C screw us over back home- I bought a SIM card with unlimited data, unlimited local calls, and a small amount of international calls for R150. My South African contract cost 10 times that per month for not even close to the benefit!

One of the coolest attractions Yangon has to offer is the Circular Train. In essence, this is just a local train that runs in a circle. The 3 hour journey is a brilliant insight into local life- you board the train and just spend the next 3 hours observing the local people conducting their daily lives on the train. The train becomes a market when enroute- people are buying and selling vegetables, all sorts of food and even building supplies- it’s quite something to see!

Onboard the Circular Train.

From Yangon, my plan is to head down south to Mawlamyine and then work my way northwards from there. I was feeling a little tired of South East Asia prior to reaching Myanmar, but this country has certainly rejuvenated me – its levels of authenticity are nothing short of motivating!

4 thoughts on “Yangon – not just a big city”