Jakarta – that city that you’re warned about. Cautioned to get in and out as quickly as possible. Warned to watch out for pickpockets. Warned about the traffic, the pollution, the water. I took this all on board but wanted to see this place anyway. The advice was warranted…

I landed in Jakarta’s  massive international airport during what could only have been classified as a cloud burst. That plane was bouncing about more than my mate Brad when he discovered robot vacuum cleaners were real. 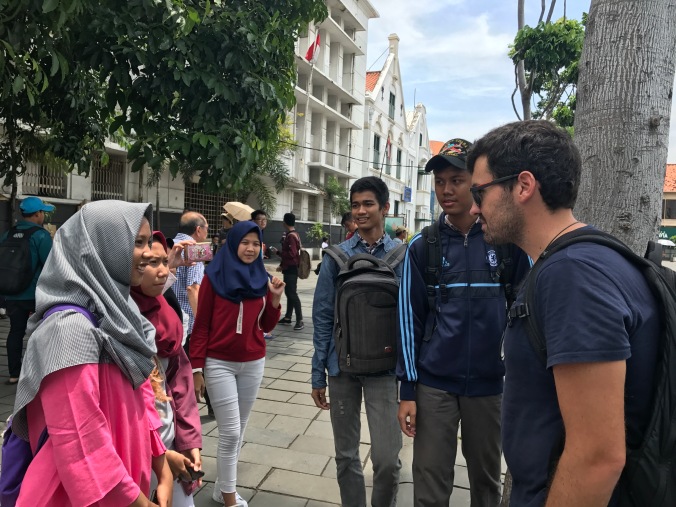 Some local school kids were doing a school project where they had to interview a tourist. That was pretty cool – decent kids. Polite! Horrifying photo making me realise how grey I am going!

I cleared passport control without too much fuss and then I set off to catch the local Damri Bus to shuttle me into central Jakarta. It’s one of the cheapest ways of getting from the airport to the city, 35kms away. This whole process also went smoothly but it gave me my first taste of the notorious traffic here. Holy shit – it’s worse than I could have imagined. The roads are crazy ALL the time. There’s never any quiet time. Scooters try and avoid the traffic on the roads by driving on the pavements. Pedestrians cross the roads with the confidence only a religious person could have. It’s not the type of Vietnamese street crossing here where you just walk and the traffic parts. It’s almost as if they WANT to hit you and destroy you. 10 points for a broken leg, 100 for his life!

I made it to the central bus station and then negotiated with a tuk-tuk to get me to my hostel – also easy enough (the currency here, the Rupiah, is in serious need of being divided by 1,000 to eliminate a lot of unnecessary zeros – spending 10,000 Rupiah just feels wrong.

After hunting down a simple dinner, I crashed, having spent most of the day commuting.

The city is about as remarkable as an ordinary bowel movement. No one knows Jakarta for any particular reason. There isn’t any impressive skyscraper, there isn’t any remarkable thing to experience like Koh San Road in Bangkok or TST in Hong Kong, or the Petronas Towers, Marina Bay Sands et al.

Instead, you get puddles of water on the street, that if stepped in, will give you Hepatitis. I did a walking tour through China Town today that was pretty interesting, I will say that. There’s a bit of history here with the Dutch and Portuguese and the knock on affects these settlers had with the locals and Chinese. The temples and food markets are decent too. But there’s only so many temples a man can see before he wants to grab the nearest $500 gigantic candle and commit suicide by pouring the boiling wax down his throat.

A candle burning at one of the many temples in China Town.

I decided to grab lunch in a local food street. I asked the lady how much my Nasi Goreng Chicken would be (Fried Rice Chicken) and she told me 14,000Rp – approx. R14). We agreed and I had a pretty good meal. The time comes to pay and now, all of a sudden, the price is 42,000Rp (around R42). I know the differential is small, but fuck that. But arguing with this crook in her natural habitat was going nowhere (and menus do not exist) so I gave up and paid. But that’s not cool. I blew it off as a once off experience but there were 2 further attempts to rip me off today and I realised that this is just what you need to expect in Jakarta.

A fish monger at the local market.

So here I am, back in the hostel, drinking a local Javanese beer called Prost (go figure) and I’m bleak. The warnings about Jakarta are true. You’ll probably find yourself here because of the airport, but take this advice: stay in the airport.