A good friend of mine spoke me into doing a series of Top 10 articles on South East Asia. I’ve been fortunate to go to almost all of the countries in the region now, so maybe a series of articles like this could be useful to someone out there. The first article will be on my Top 10 Islands in the region.

It’s a beautiful island, for sure. For me, it’s more of a comfortable, tour package sort of island which will no doubt have an appeal to many. As a backpacker, this left me a little cold if I’m honest. This being said, the major appeal of Penang is George Town, its major city. It’s a street art lovers ultimate destination and you’ll be amazed at the creativity expressed on the walls of the city!

Penang is also BIG, with it’s own airport and the like. It is also connected to mainland Malaysia so it doesn’t really have that small tropical island sort of feel, which I thrive on. 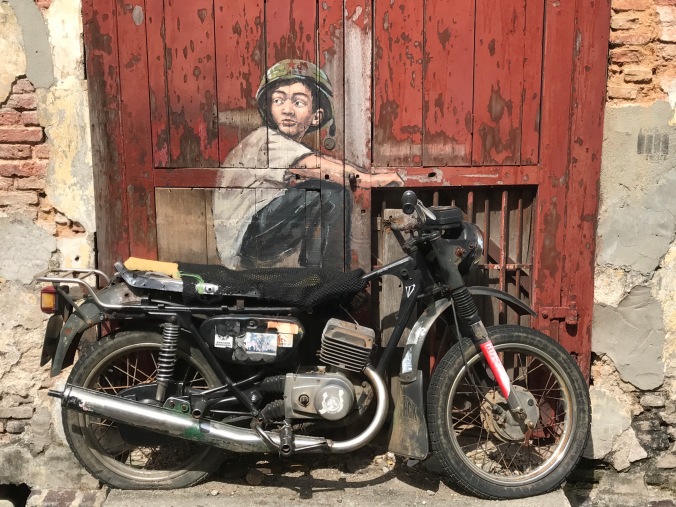 The island of Koh Rong Samloem, the smaller brother of Koh Rong in Cambodia, has the ingredients for an awesome tropical island get away. Be warned though, it’s backpacker central so if you want a party, this is the place to come. Choose your accommodation wisely though. I stayed on a beach that didn’t have access to the town unless you caught a very intermittent boat shuttle. I guess there is an appeal to being in a remote spot, but having the flexibility to explore the entire island is a must for me.

There are some ‘secret’ beaches on the island, which are beautiful and are certainly worth the walk to get there. If you’re looking for wifi or cellular reception, you won’t find any on the island. 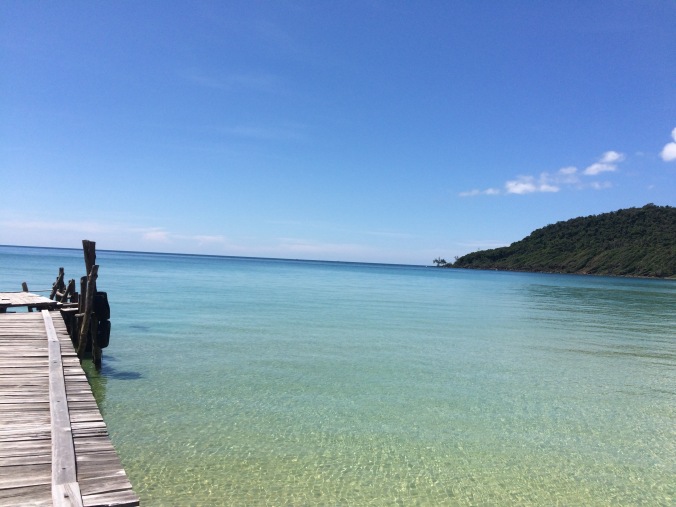 This is an interesting one for me. I was there at the end of the rainy season so the weather was a little touch and go. The island itself is rather large, accessible by both planes and ferries and the choice of accommodation is huge. I stayed in a small hostel called Island Life, which was pretty special.

You have tropical waters and palm trees all around. The range of food available is also excellent and if you want to learn to ride a scooter, this is the place. I spent a decent amount of time lazing under a palm tree – just what the doctor ordered.

My only criticism is that most of the good beaches are private and the public beaches are filthy, which is really sad. If you head there, try stay in a hotel/hostel that has access to a private beach. 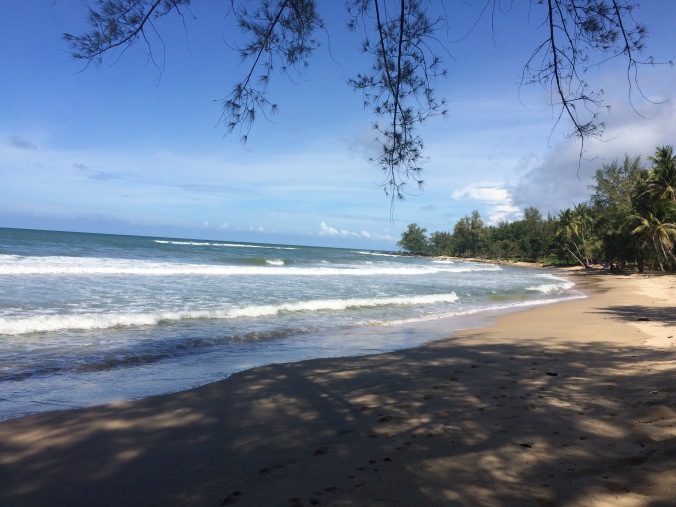 The alternative to Penang and is known to be more laid back. It’s also a big island in terms of logistics and I felt most of the island was under construction when I was there – everywhere you looked, there was a truck or building site.

Apart from that, the island has some decent beaches with emerald coloured water and the sunsets are great to watch whilst enjoying a cold beer. Interestingly, Langkawi is a duty free island which means alcohol is a bit cheaper here than in other parts of Malaysia. This being said, it’s still not cheap.

Its a great island to hire a scooter and drive along some of the winding mountainous roads and take in the scenery.

There is no shortage of accommodation here, you’ll be able to find something decent no matter what your budget. This also feeds the package tourist monster, though. 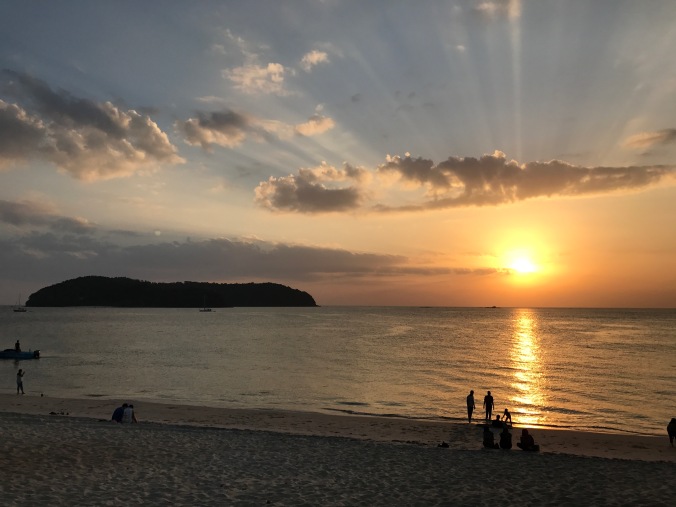 A killer sunset in Langkawi.

This is an interesting one as if you base it on the island alone, it wouldn’t be on my list at all. The island is extremely tiny and mostly inhabited by Filipino refugees. The island is filthy and you can’t swim in the water around the island unless you are staying in one of the super-luxurious Chinese owned resorts.

So why is this on the list? If you want to snorkel and dive, this is one of the worlds best locations. Nearby Sipadan is world renowned for some of the best reefs the world has to offer.

The downside though is the island is pitiful unless you’re staying in a decent hotel. There aren’t any restaurants in the town and you’ll get bored unless you’re snorkelling and diving constantly. You can access the island from the mainland Bornean town of Semporna, which is also a pit of despair. 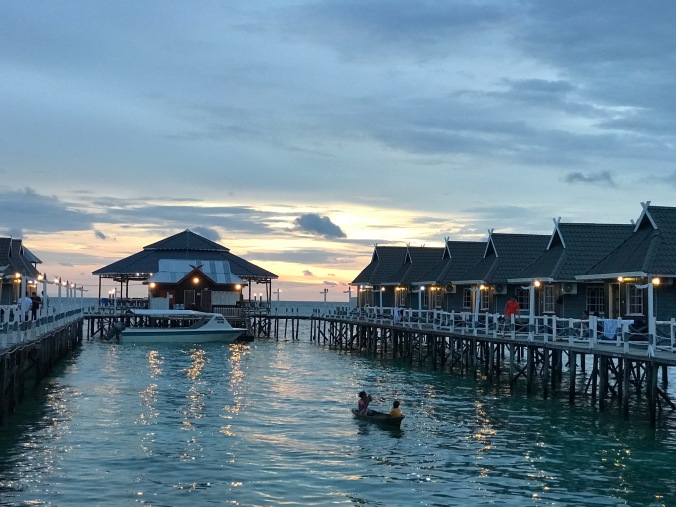 Mabul –  beautiful marine life but the island leaves a lot to be desired.

The top 5 are getting more difficult! There’s no secret to it: if you want one of the best parties you’ll ever have, Koh Phangan is the place to come. With the half moon (jungle party) and the full moon (beach party), you’re spoilt for choice and the town thrives on this.

The island itself is beautiful and has numerous beaches one can explore – most of which are beautiful, some are average. Food wise, you’ll have every option imaginable.

Getting to the island is easy enough with the ferry from mainland Thailand. I think it’s safe to say that Koh Phangan is on the map because of its nightlife so if that doesn’t really appeal to you, I think you’d be able to find better islands to relax on in the region.

The island is pretty big and getting around it is best on a scooter or by using one of the overpriced taxis/trucks. 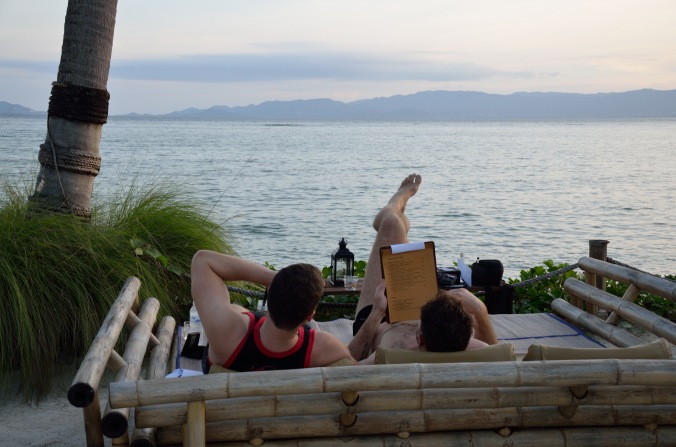 Also an island if you’re looking for some nightlife, but for me, it’s a beauty. The water is crystal clear and although the beaches are coral, the snorkelling isn’t too bad.

It’s accessible from both Bali and Lombok but the connection from Bali does take some time.

You can walk around the island in 2 hours and there’s a large mix of fancy resorts and backpacker hostels all around. Beer is cheap and the food is good (although I did have a bout of food poisoning the one night, but that isn’t the islands fault).

If you’re looking for a tiny, beautiful tropical island with a mix of nightlife and chill (more nightlife if I’m honest), Gili T is for you. There are 2 other Gili’s – Air and Meno – which are much more relaxed than it’s big brother. 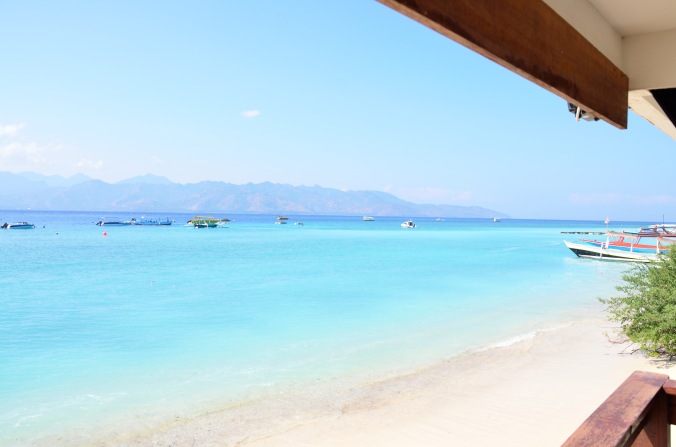 Gili T with Lombok in the distance.

I feel bad for putting this at number 3 but truthfully, the top 3 are almost identical in my opinion.

Koh Lipe is a special one – it has all the ingredients of paradise: pristine, clear water, white sand beaches, palm trees and amazing food (just don’t eat any calamari fritters from Family Restaurant).

You can walk to all the beaches and watch both sunrise and sunset depending on what side of the island you’re on. I believe the snorkelling is great and there is a host of water-based activities available like kayaking, etc.

The range of accommodation is very wide, as is the variety of restaurants suited for all budgets. Although a tropical island, I didn’t see any options for a hike around/on the one hill which could have been fun to explore. There aren’t any cars on the island, with the exception of mopeds to ferry people to far flung hotels.

As it’s Thailand, beer is super cheap and the Thai curries (try the Massaman from Lion Restaurant) are incredible! Many restaurants play movies throughout the night so if you want a chill, grab a beer and watch whatever is showing. 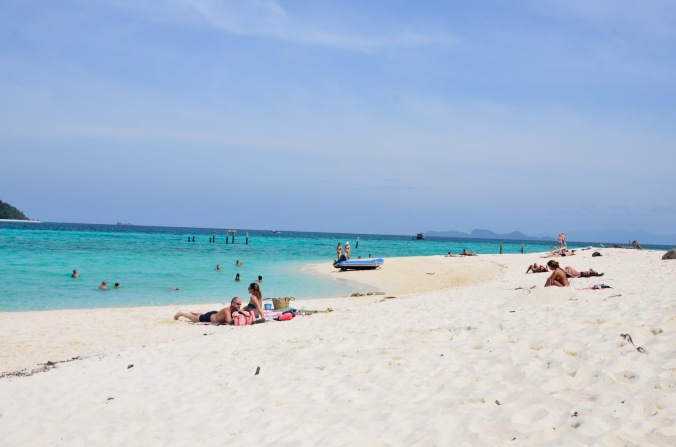 As a stand alone island, Perhentian Kecil is my all time favourite. It’s the smaller of the 2 Perhentians (its big brother being Perhentian Besut).

What I loved about it is that it still has the feeling of being untouched and un-exploited. You can only access it by ferry and the island shuts down and becomes inaccessible during the rainy season due to rough seas. I think this has helped preserve it.

There are no fancy resorts here – accommodation is basic but the focus is on maximising sea views and the island feel. The island is also very much a jungle and you can walk around it’s trail which circumnavigates the island. It’s so ridiculously beautiful.

I chose to stay at Keranji Beach (a small private beach but still linked to the town via the jungle path) for a few nights and then stayed in a few other places on the island as I didn’t want to leave.

You can only get to the island by boat, there is no transport available on the island and things are basic, but so so beautiful. The water is pristine and whilst I’ve experienced better snorkelling, the snorkelling is pretty good!

You may battle to find beer on the island but it’s there – you just have to look a little harder. I’d usually take points off for this but the island was so incredible, I can’t penalise it for that! If you’re a backpacker – give Butterfly Hostel a go. It’s a DIY hostel where you write your name on a white board to make a reservation and then check yourself in. It’s basic but the views are incredible and it’s a novel experience. 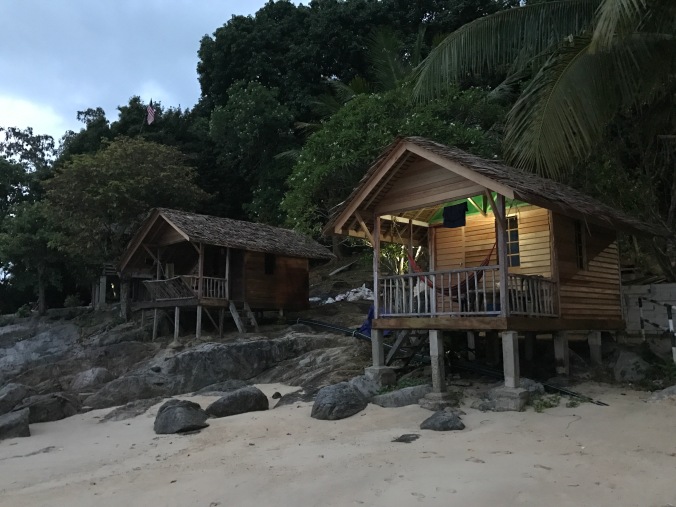 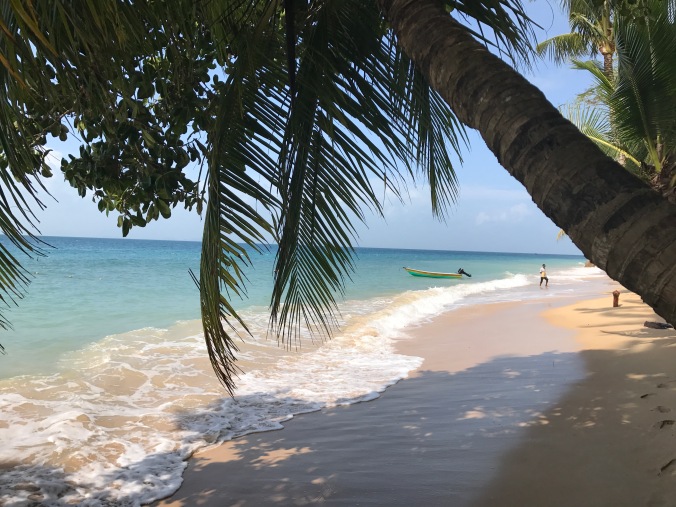 One of the almost deserted beaches on Perhentian Kecil.

My favourite place! Although not a stand alone island, the waters around Palawan are full of remote, deserted islands, complete with white sand, crystal clear water and zero mainstream tourism.

I explored the region through a company called Tao Philippines and I have to say, this was probably one of my top experiences over the past year! You can read about my experience here.

The snorkelling is incredible and the local people are the best! I really felt like I learnt something new whilst in the region, and even if I didn’t do Tao, I would feel the same after having just spent a short time in El Nido.

Our accommodation was basic but sufficient, the food: out of this world and the sunsets… I can’t even begin to describe them. A friend of mine once told me that a Palawan sunset will ruin every other sunset I’d ever see, and I have to agree! 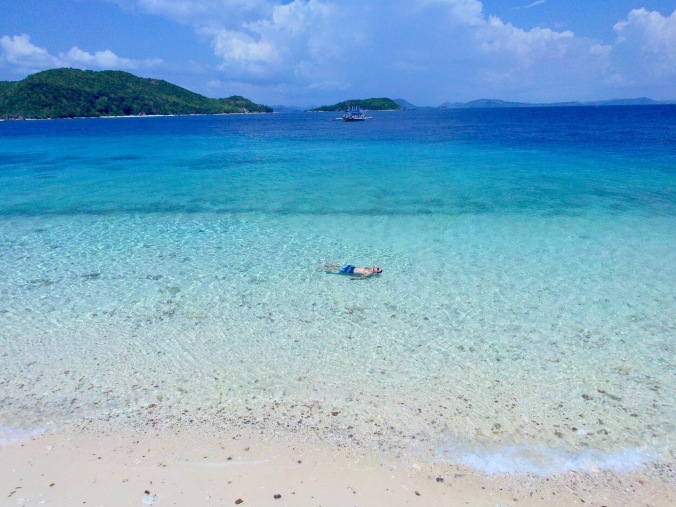 Enjoying the pristine water of one of the small, deserted islands in the archipelago. 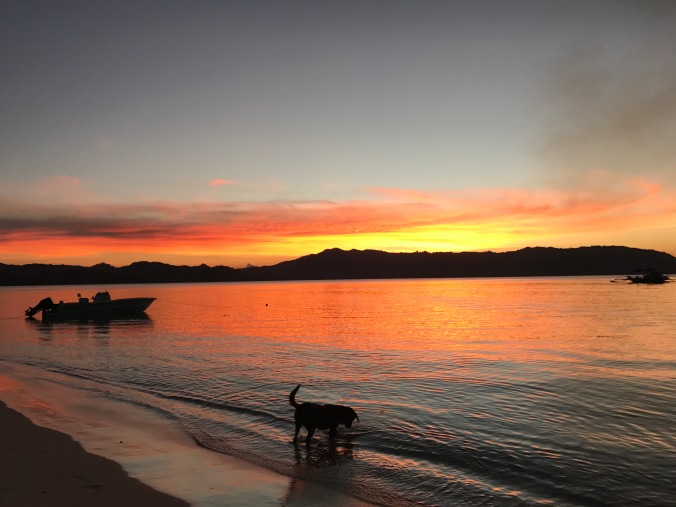 One thought on “My Top 10 South East Asian Islands”